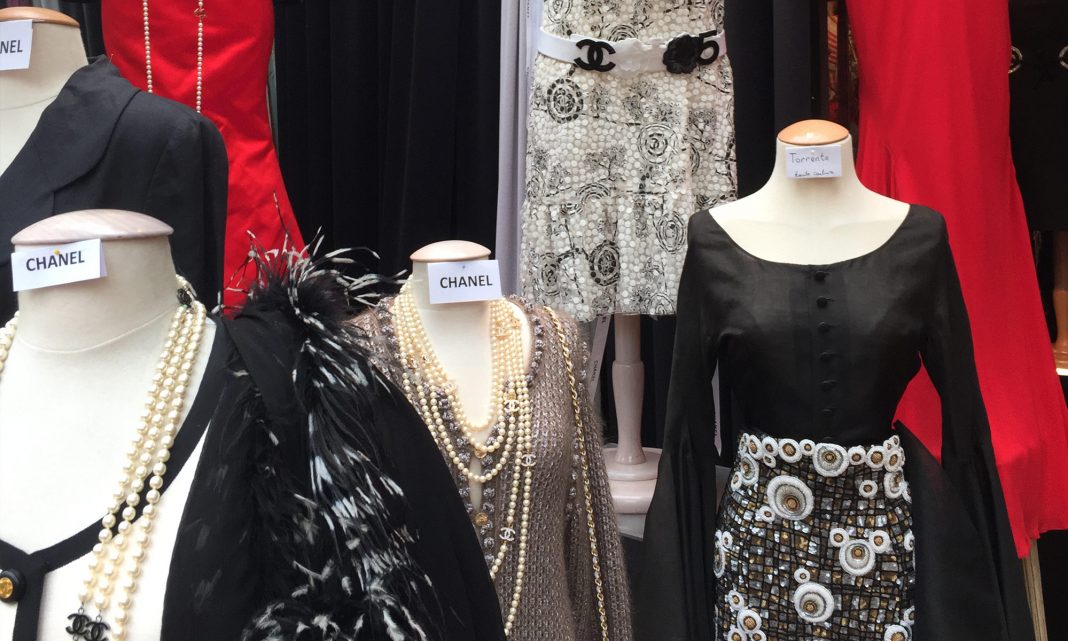 October 2014 was my first trip to Paris, France. Once I found out I was going, the first landmark that I knew I could not miss out on was the Les Puces de Saint-Ouen.

Just North of the city line of Paris lies the largest antique market in the world. Les Puces de Saint-Ouen, has some of the best shopping resources  spread out over 750,000 square feet, 15 different markets with over 1,700 dealers. The market is open every Saturday from 9AM to 5PM and on Sunday from 10Am to 5Pm.

Of course, I  went to hunt down the best vendors selling designer vintage clothing, jewelry, and handbags. But before I headed out I looked to Cameron Silver of Decades in LA to give me a recommendation on where to start my hunt. And  his recommendations were so fabulous that I thought I would share them with you.

My first stop was the Serpette Market and within minutes I was pulled into the most jaw dropping collection of vintage, pre-owned, and one of a kind handbags, trunks, and small leather goods. Located on Alley 3, Stand 15, Le Monde Du Voyage is run by Alain and Helen. They have been in business more than 30 years and they offer the best selection and prices that I have ever seen. And don’t worry if you don’t speak French because Helen is British and Alain is fluent in English.

I, of course, did not leave empty handed. I purchased the Takashi Murakami for Louis Vuitton Pochette for my collection. Afterwards, Helen and Alain proceeded to tell me that Murakami was actually a client. He had been there previously to purchase 2 Louis Vuitton Trunks that would become part of two sculptures for his show at Versaille. And before I left their booth Alain pulled out a book containing pictures of the finished Murakami Sculptures that contained his trunks. He was so proud, as well as he should be.

If you are looking for vintage, pre-owned, or one of a kind Hermes, Louis Vuitton, Goyard, or Chanel I highly recommend that you make this a stop on your Parisian Flea Market outing.

Now that you have worked up an appetite, make sure you drop into Le Bistrot Paul Bert located at 18 Rue Paul Bert right outside the Paul Bert Market. This little bistro is the perfect place to have a quick traditional French meal so you can get back to shopping.

My second stop was the Paul Bert Market where I immediately got the cold shopping sweats and lost all form of communication except to point and squeak when I came down Alley 1 to Stand 13 and 77. Les Merveilles De Babellou is by far the best selection of designer vintage that I have ever seen in one place. Just what they had displayed in the windows was more than I could handle but when I finally went into the store I cried. I felt like I had walked into a fashion museum.

Chanel, Hermes, Yves Saint Laurent, Christian Dior, and Louis Vuitton are just of few of the major designers they carry. If you want amazing designer vintage from the 1920’s all the way to today, Les Merveilles De Babellou is an absolute must.